Posted by Unknown at 8:44 AM No comments:

I wrote in a previous post about my travels to the Balkans and Eastern Europe, and while I absolutely loved my experiences there, I couldn’t help but notice that I seemed like the only Black person travelling. (Or at least it felt that way!) And I remember feeling that it was somewhat disconcerting and a bit isolating. There was no way to blend in without curious stares, nothing threatening or malicious, but stares nonetheless. But travelling to Ghana was a totally different travel experience for many reasons, but specifically because for the first time in my life anywhere (besides living in New York City), I was not a visible minority.

Actually, the feeling of not standing out happened on the flight from Amsterdam to Accra. Just boarding, there were all these Africans or people of African descent in line! Only the Dutch crew and a few other passengers stood out as a minority. Obviously, it makes total sense; it just was my first experience flying to an African country...so, new to me.

And when I arrived in Accra travelling to Kumasi the next day by bus, it became quite clear of what I might be in for in terms of being a “non-visible minority”. Certainly, having been born and raised in the United States and currently living in Canada, and having never set foot in Africa before, I did stand out with my Western dress, American mannerism, etc., not to mention the fact that I only spoke English and not the local dialect. So I was noticed, but I wasn’t an overwhelming object of curiosity. And, that was so refreshing!

It’s a bit superficial, but I felt I had found my people, so to speak! J And, of course, I had in a way. I am not sure of my exact lineage beyond a small village in Mississippi, à la “Roots” per se, but knowing a bit about the history of the Atlantic Slave Trade (which I was fortunate to get a further glimpse of while visiting slave castles in the Cape Coast), I know that my roots are somehow there.

So travelling while Black in a Black country...definitely a new perspective. 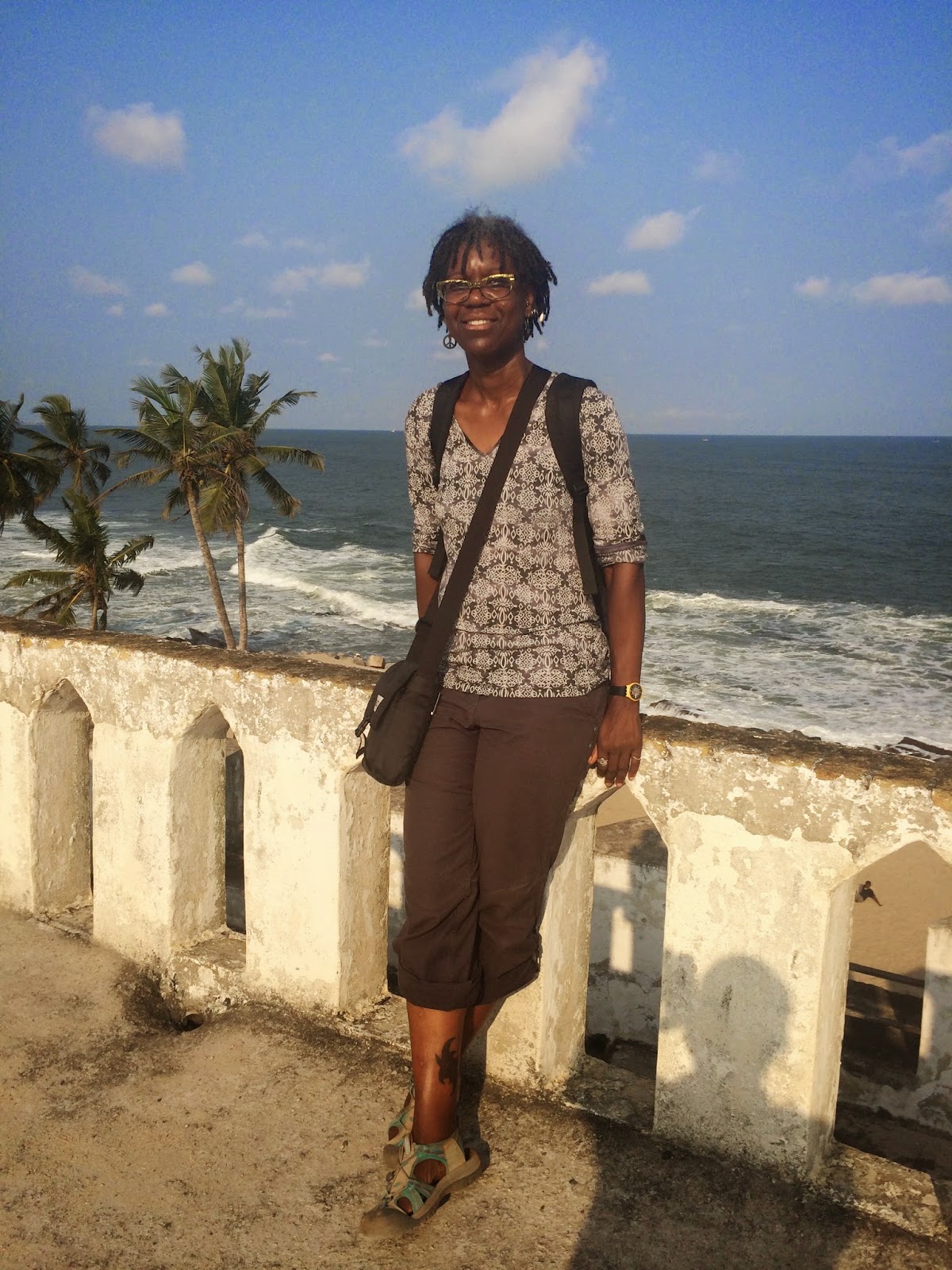 At the Cape Coast 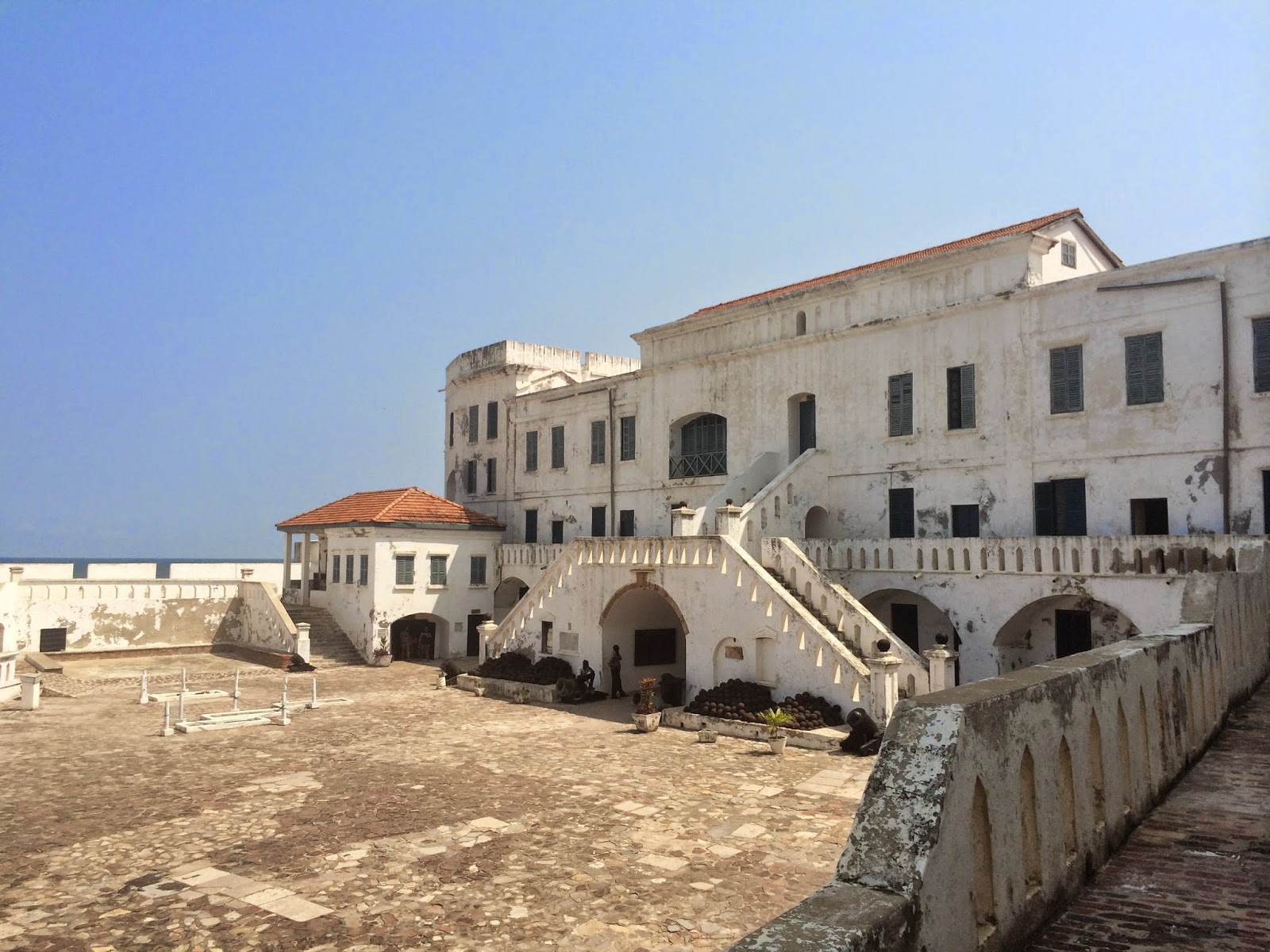 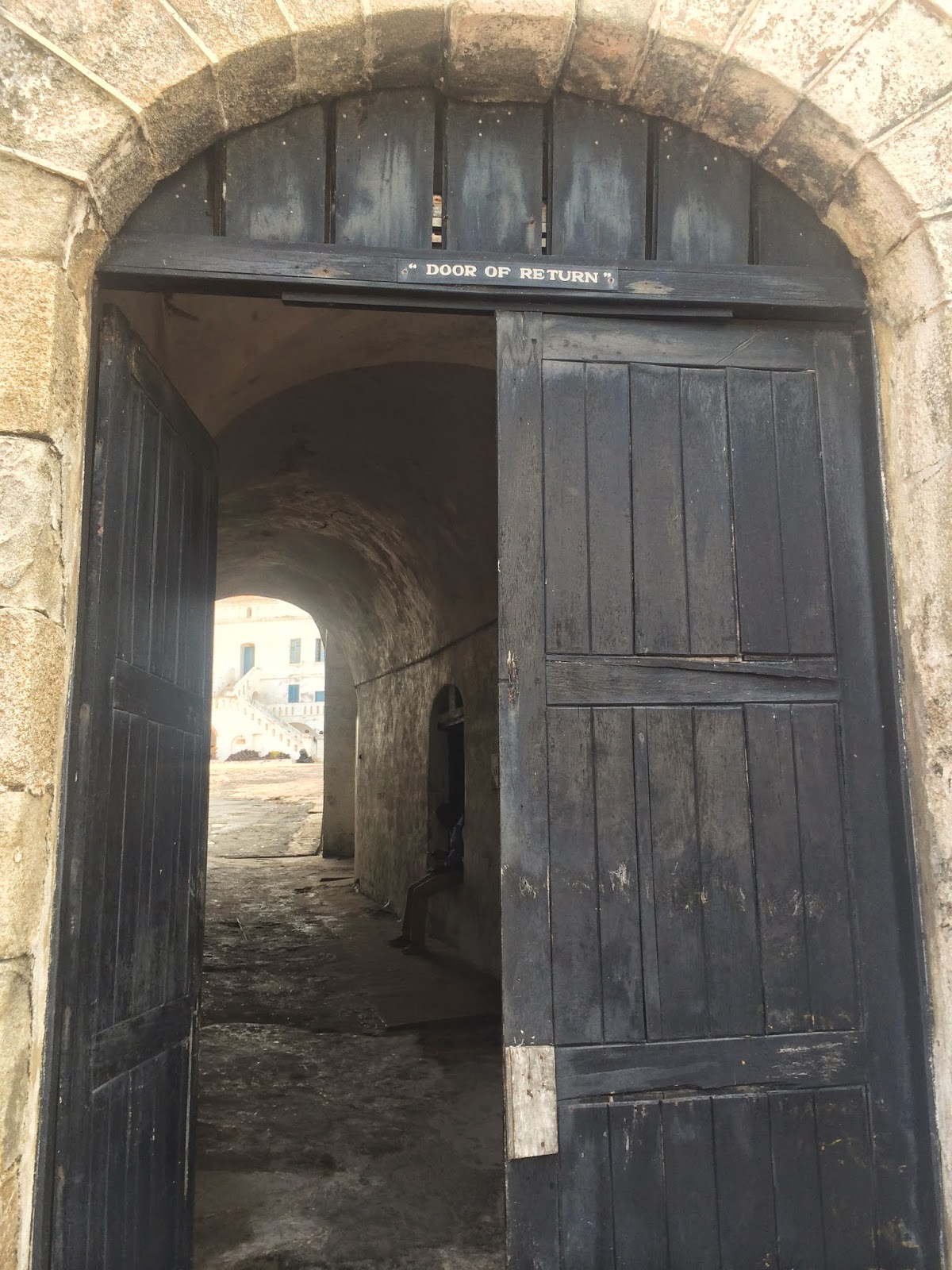 Posted by Unknown at 2:59 PM No comments:

My Ghana Trip Slideshow. The added music is "Wassiyé" by Habib Koité, who is not from Ghana, but I love the tune!!

I didn’t really plan that much for my first trip to Amsterdam. The city was a connection for my flight to Accra, Ghana. I had about 3 days, and apart from making a reservation through AirBnB, I thought I’d just wing it, with the only key sights being the Anne Frank House, the Van Gogh Museum, the Rijksmuseum, and gazing at beautiful canals, houseboats, flowers, and sampling a little bit of the local “culture.”

Walking around Amsterdam without a map is the greatest!! What a fantastic walking city! I’m not really good with directions or following a map, so I love when I can just throw caution to the wind and check out a town. Since my AirBnB digs were conveniently close to a tram stop, and my AirBnB host had given me some rudimentary directions in getting to the city centre, and the weather was nice, I was set for a great walk around.

I stumbled into World Cup Madness surrounded by revellers in orange! It wasn’t hard to get swept up into the enthusiasm! 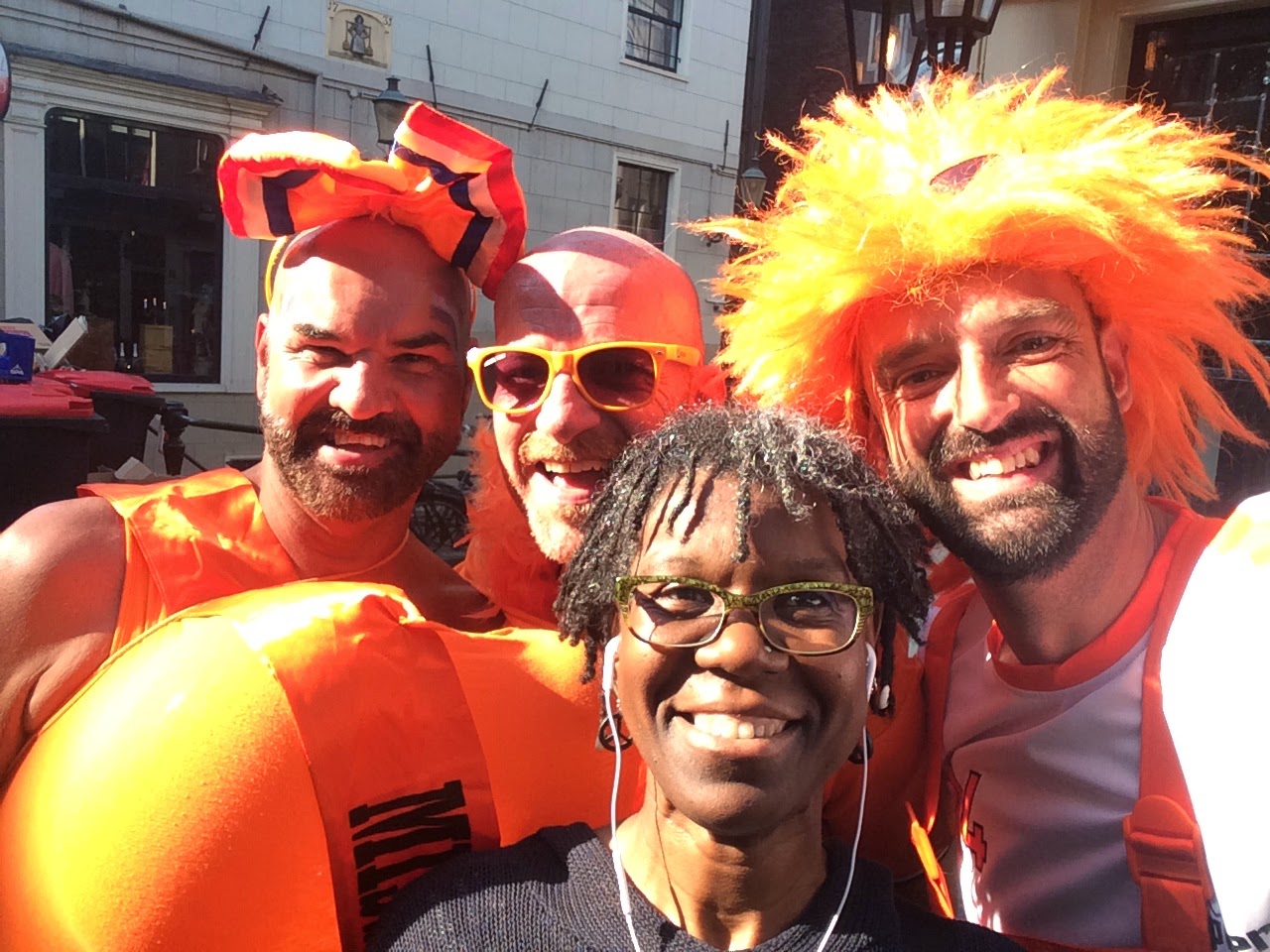 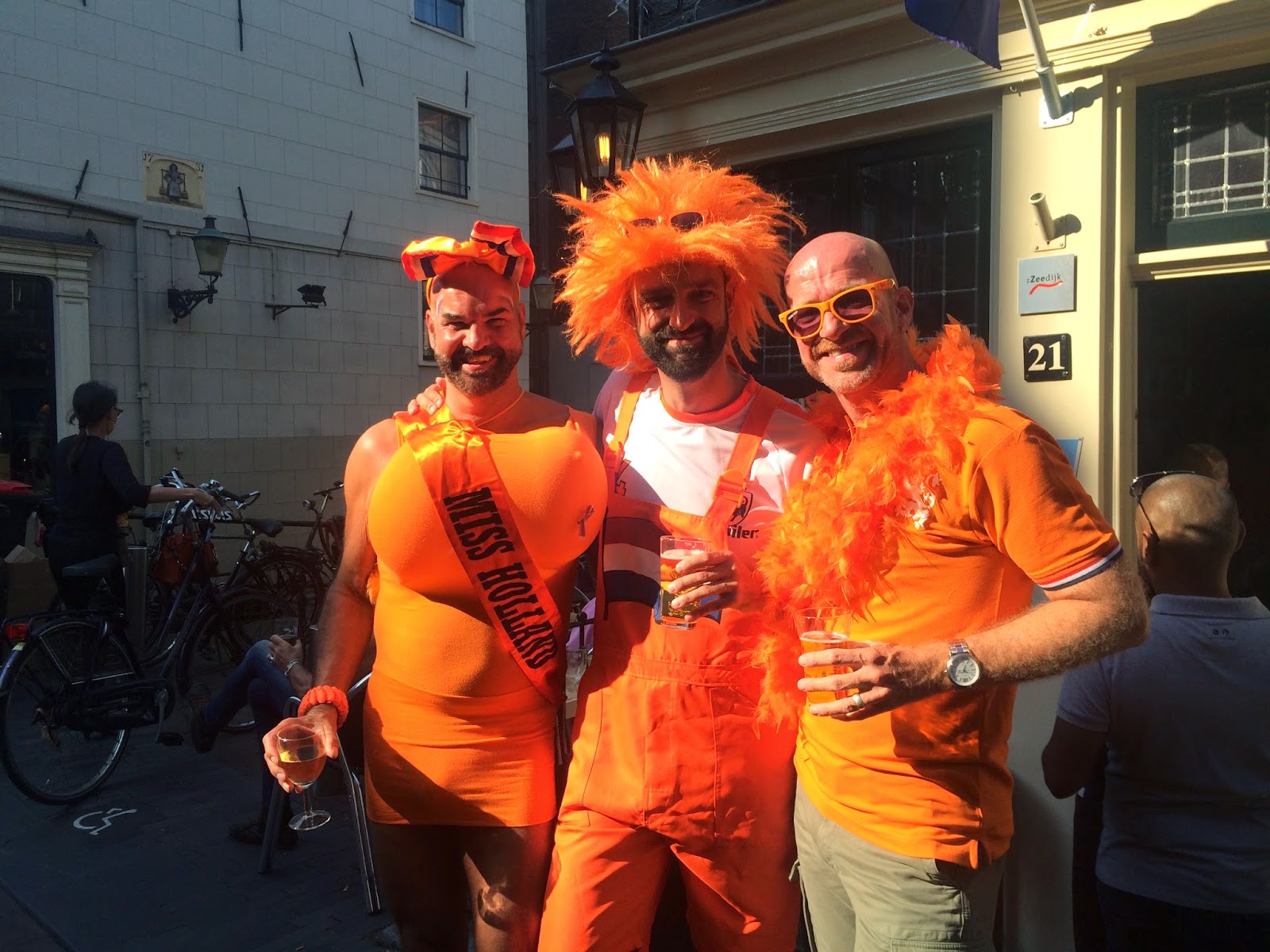 The Van Gogh Museum. I had bought my timed ticket online, which was really helpful since it’s a very popular museum; and rightly so. I absolutely loved every bit of it! Van Gogh has always been a favourite of mine, but visiting this museum helped me learn so much more about his life. I held back a little and only bought three postcard prints.

Anne Frank House. Truly hard to describe the feeling of walking around inside...but the feeling I was left with was “hope.”

I know I’ll be back to Amsterdam and give it more time, with some exploration of other parts of the Netherlands. The little bit I was able to sample was fantastic: the people, the simple beauty, the ease of navigation, and the vices. 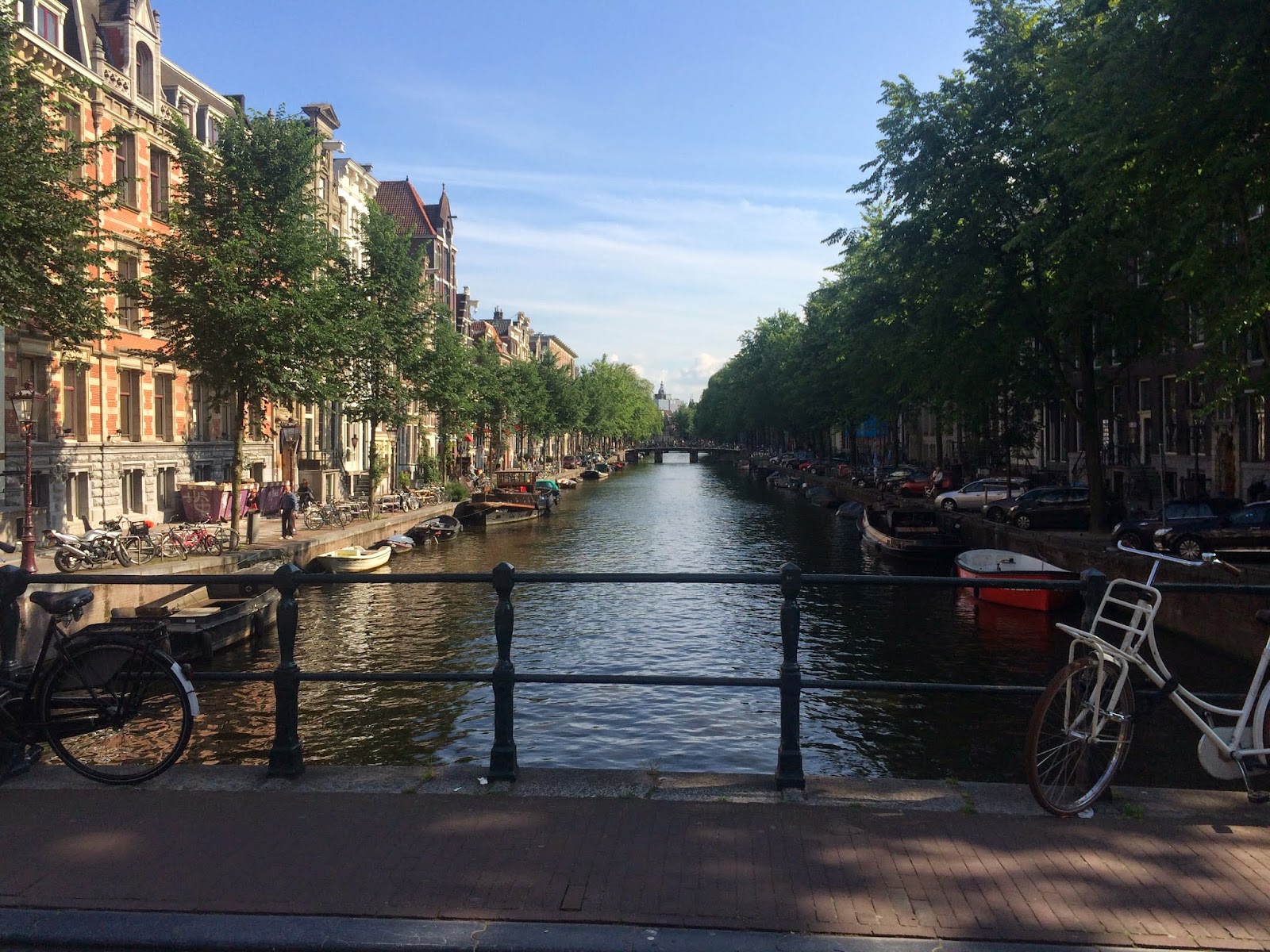 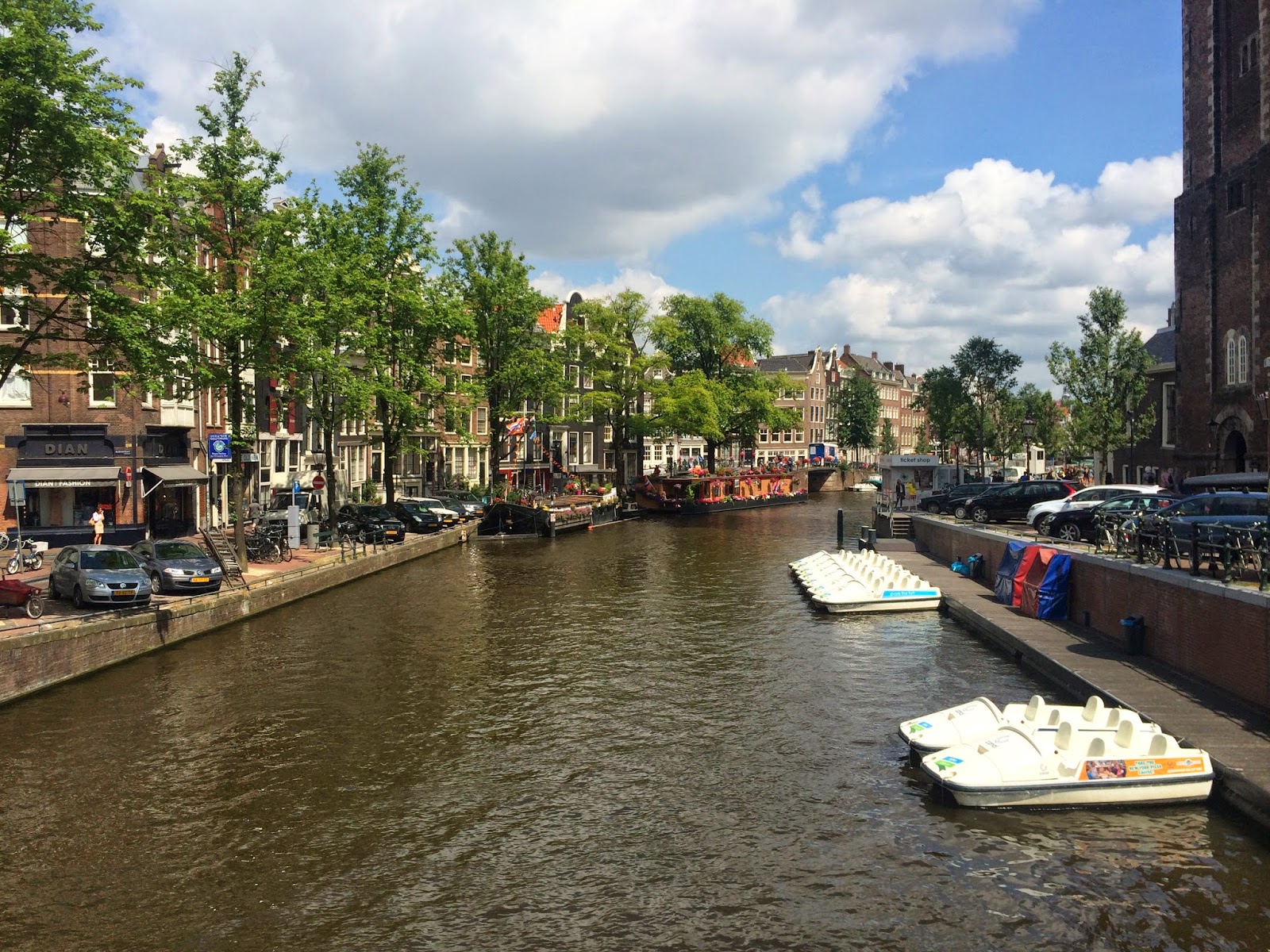 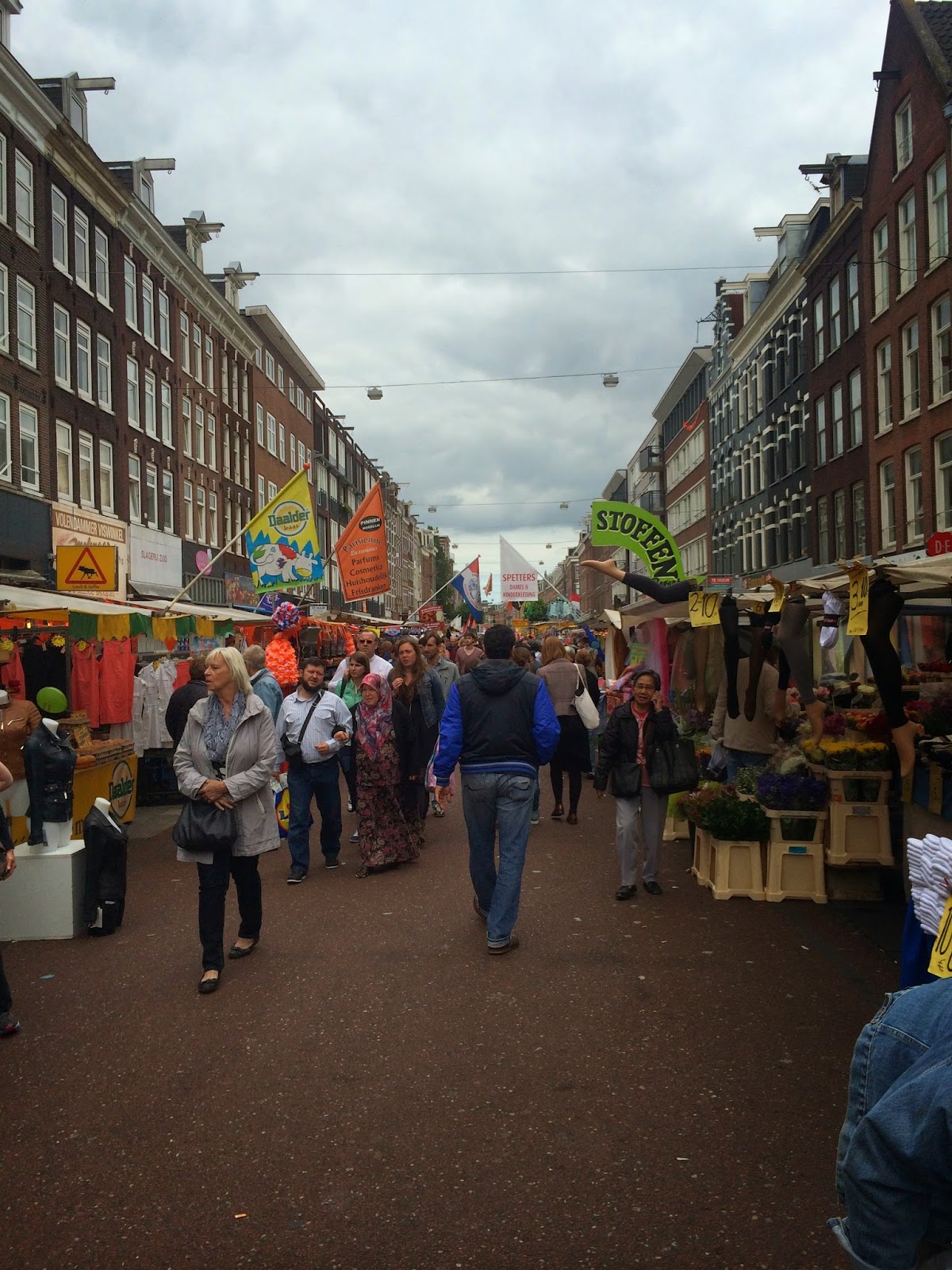 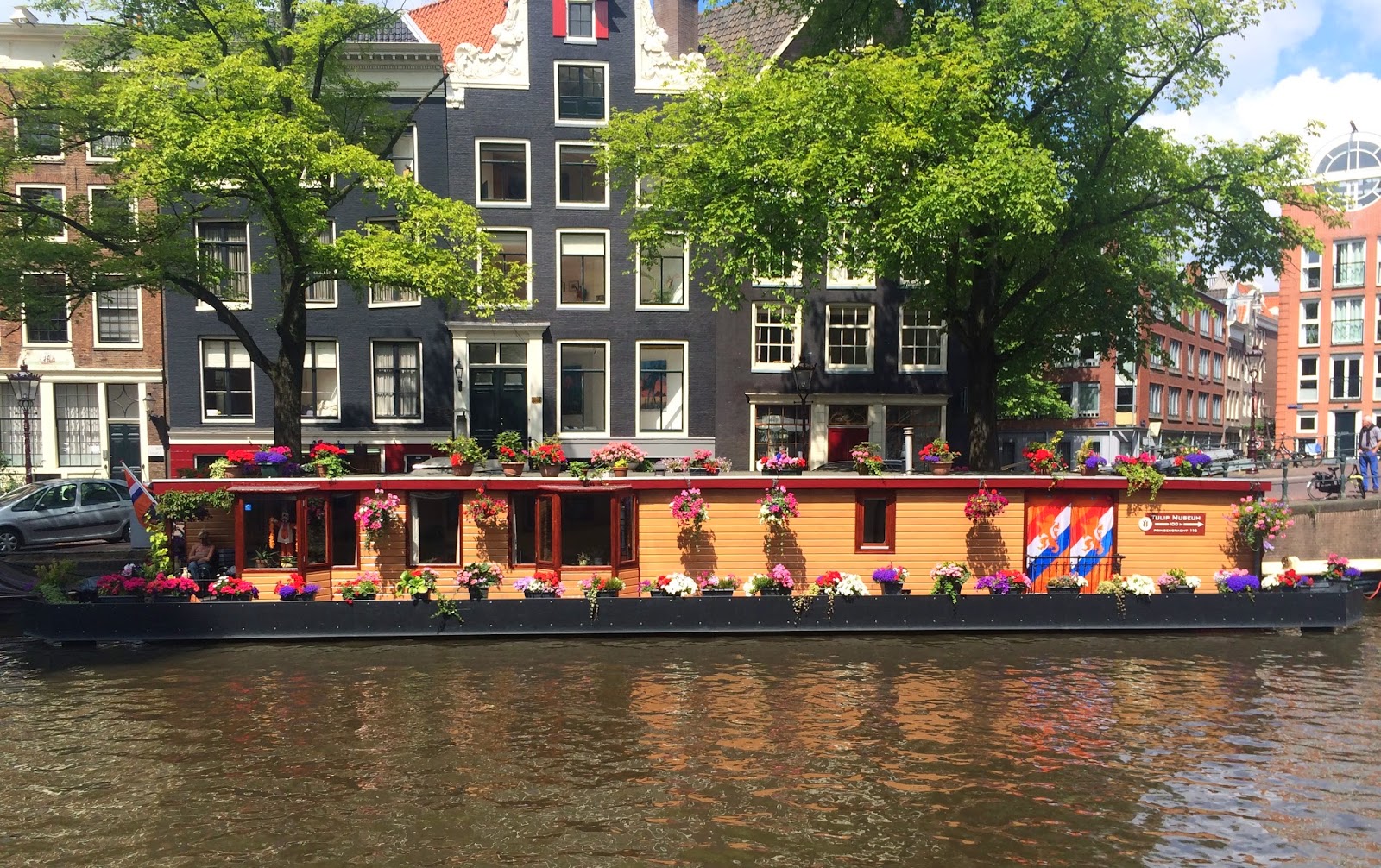 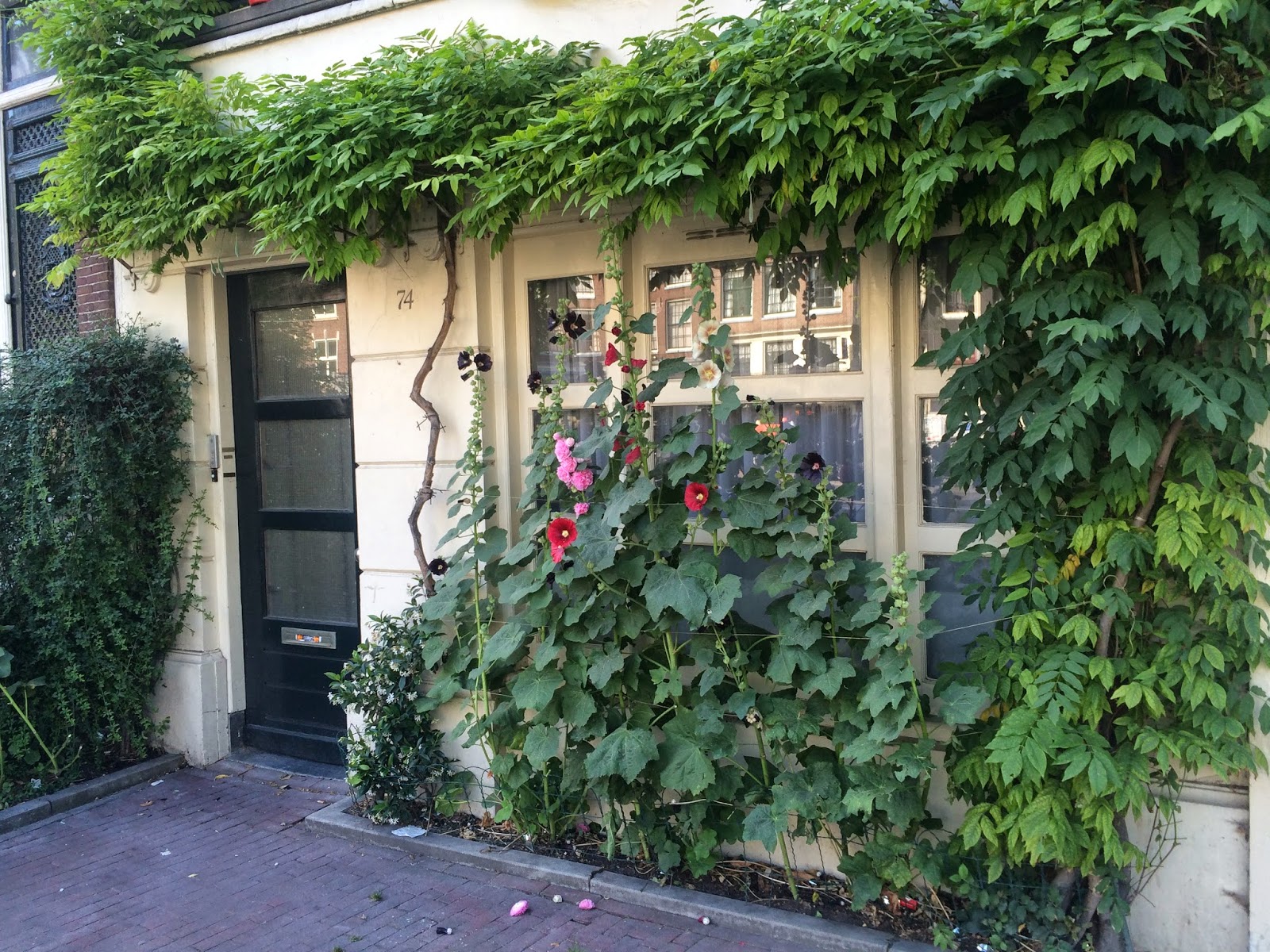 Posted by Unknown at 5:14 PM No comments:

In Search of Kente Cloth!!

There I was getting into my volunteer teaching tasks (planning my lesson on present perfect) when the day turned into a hunt for authentic Kente cloth!

Since I would be leaving on the weekend (time really flies!), my "boss" thought I'd better use some time to get the Kente cloth because I would also need to speak to a seamstress to get an outfit made. I really didn't know the process would entail all of that, but so much of my experience had been learning how things work, so I was up for it.

After my boss spoke to someone who knew someone who knew someone (all part of the process), we made a mad dash (by way of the typical rickety taxis) to Kejetia Market. I wish everyone could experience that place: the largest open-air market in West Africa! There is simply nothing like it anywhere I've ever been. Just imagine an insane amount of people, an insane amount of activity narrow alleyways, smells, sweat, music, someone speaking on a loudspeaker, chaos...yet order, women transporting their goods on their heads, a constant flurry of comings and goings, stalls packed with anything you could want. And then add sweltering heat to the mix. But somewhere inside was the Kente cloth.

We got lost about seven times! While gulping water, I stupidly asked if there was a map of the market. Of course not...all you need to do is ask the ladies in the stalls and they would direct you where you needed to go.

We found the area where women oversaw stalls filled with Kente, men & women sat at sewing machines putting the strips together, men moved sacks and sacks of cloth in and out, and money was being exchanged. My boss found his contact and all I had to do was find the design I wanted. My boss would handle the negotiations. I had already been instructed to NEVER pay the price that was given at first; I had to haggle. I was pretty intimidated, though, so my boss took over...he said he was happy to do it. "

Thank goodness he haggled on my behalf, because I don't think I would've been able to get what I wanted and with the price I wanted. A taxi on the way back and we were on our way to the seamstress.

All-in-all, it took four hours from getting to the market and picking out what I wanted to discussing designs with the seamstress and him taking my measurements! Not quite like going to the mall! Lol! 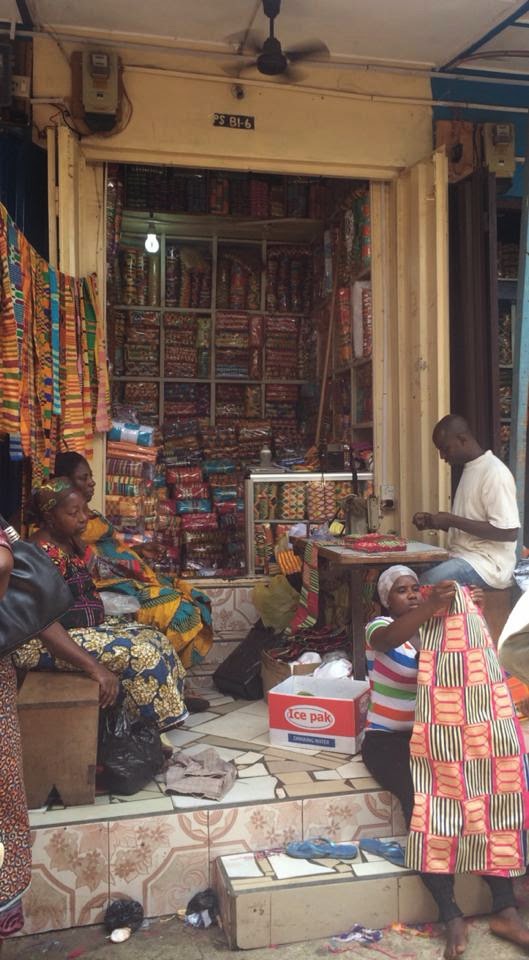 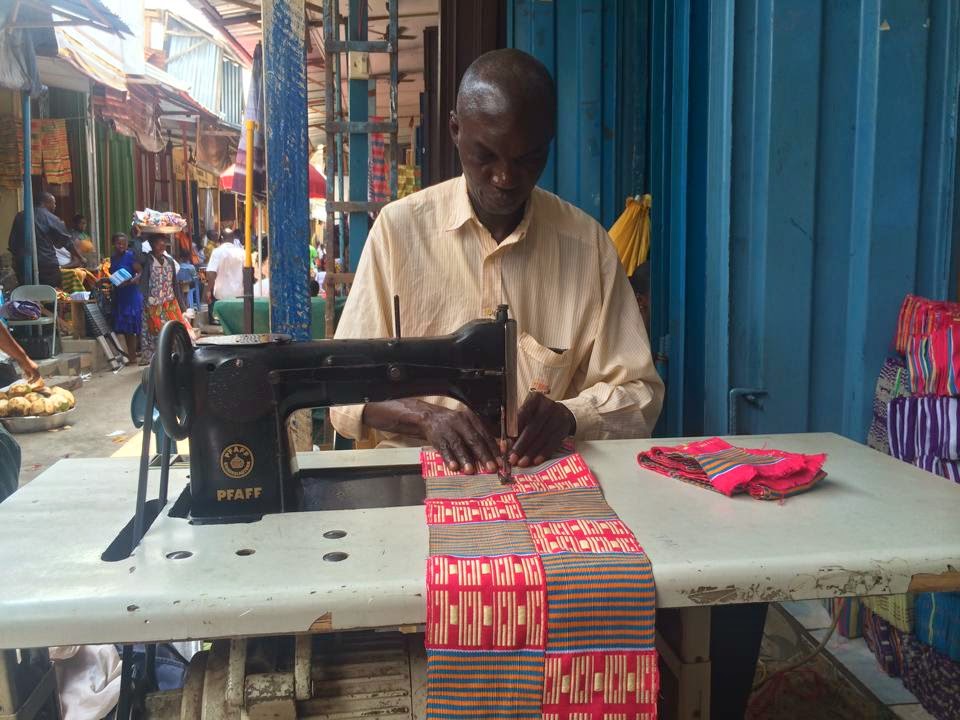 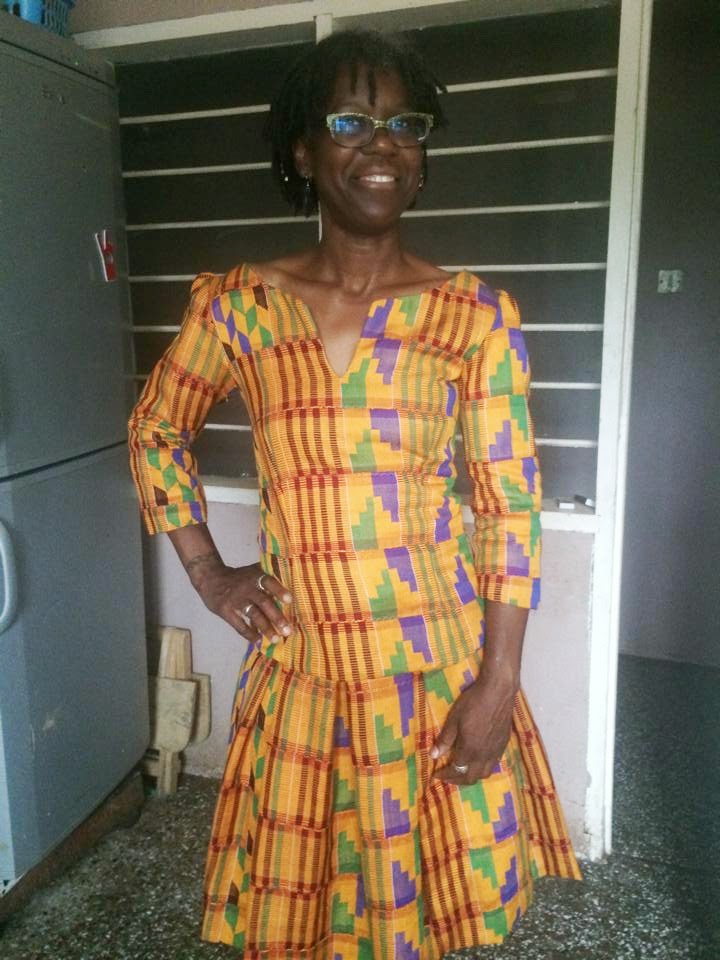 Posted by Unknown at 6:36 PM No comments:

Teaching at the school today trying to inspire some writing about "Football Friday" using past tense verbs! It kind of worked!
Plus two of my little charges for the walk back to the children's home. Just adorable! 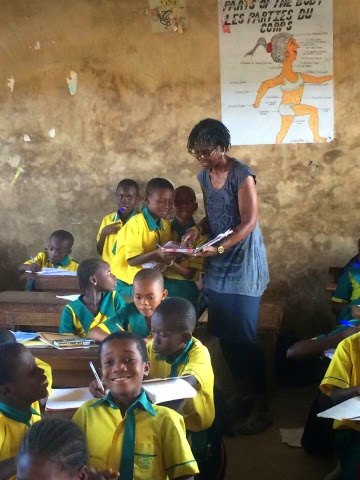 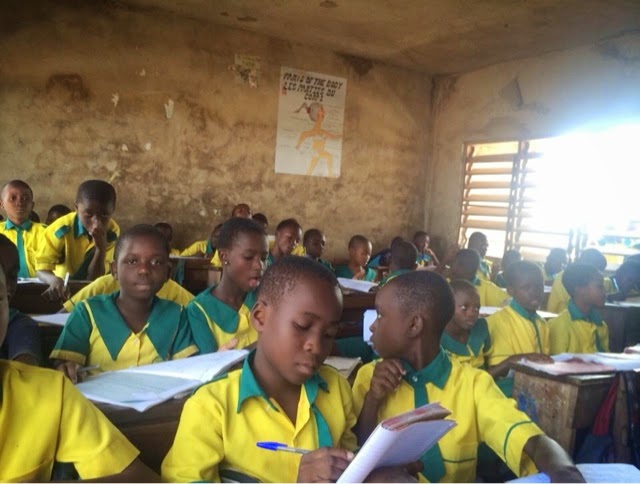 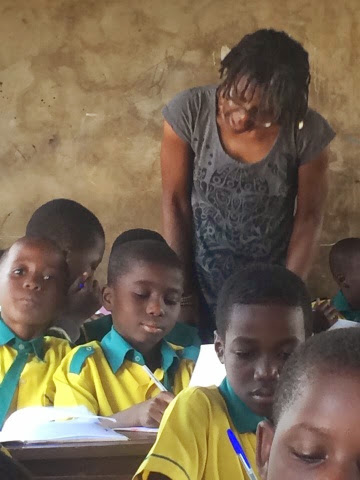 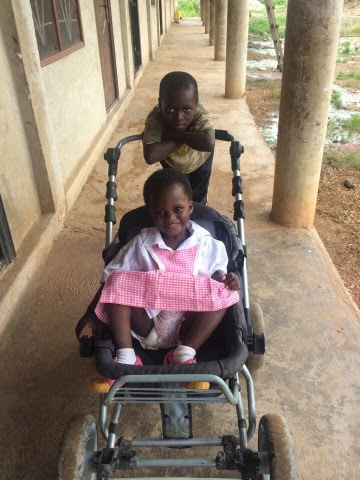 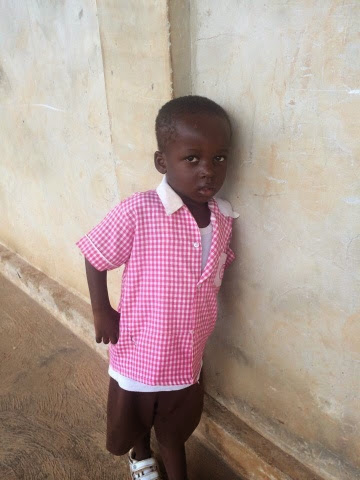 Posted by Unknown at 1:53 PM No comments:

Today got to visit the Manhyia Palace Museum and learned some history of the Ashante Kingdom and its people: fascinating. And prompted me to make plans to go South next weekend and visit the Cape Coast slave forts and Elmina Castle. Definitely part of my African American history, too.
Also got to a little bit of the Kejetia Market, the largest one in West Africa! It's overwhelming with so many people and so much stuff! You name it, it's there! It was hard to take decent pics because there's constant movement!! But I managed to get some gifts for friends. Definitely have to improve my bargaining skills! 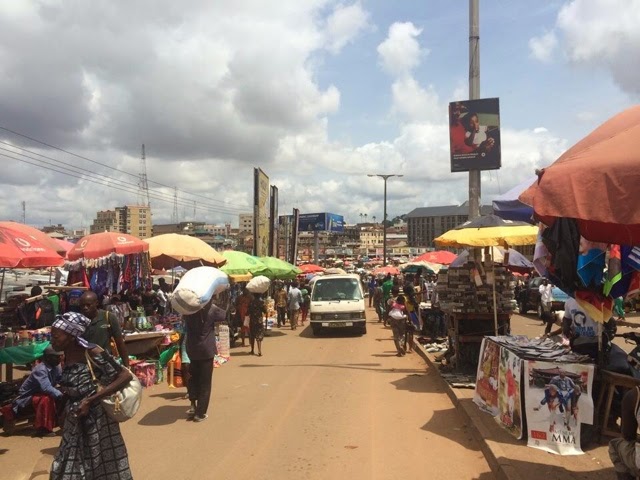 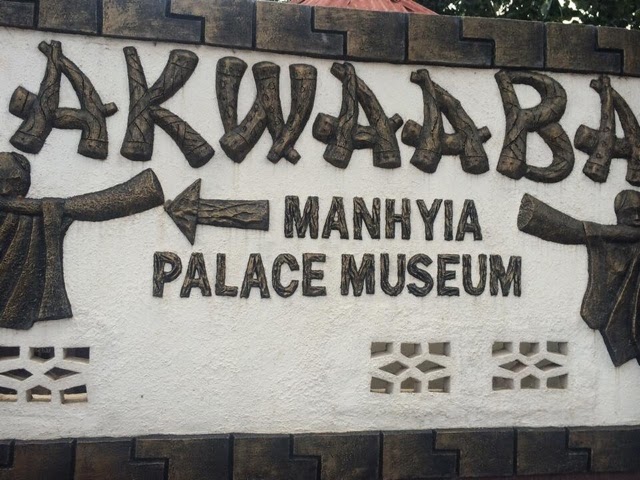 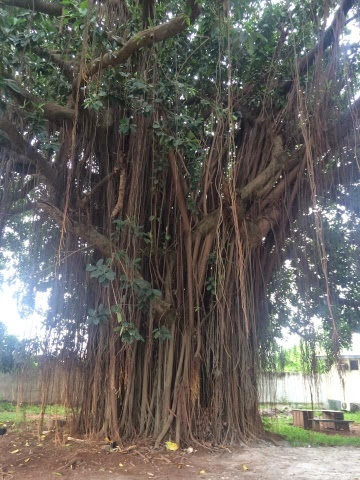 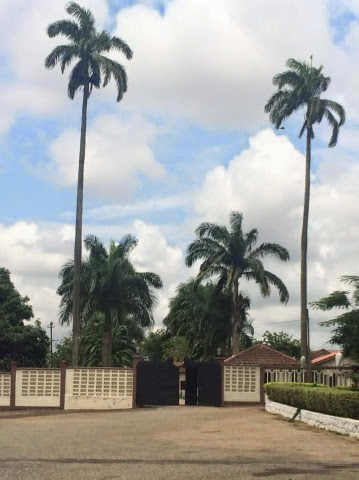 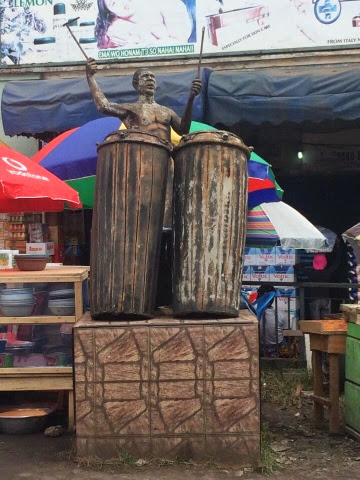 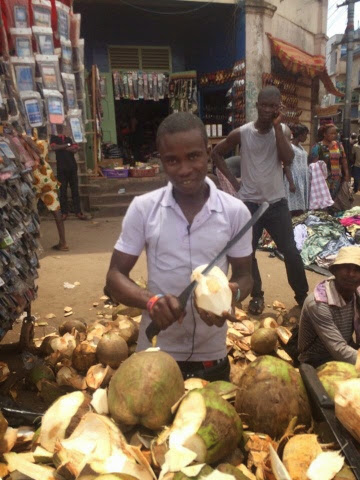 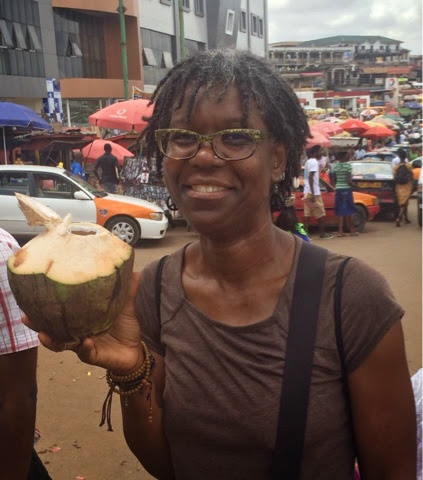 Posted by Unknown at 1:47 PM No comments: